Well it has been a while since I have blogged and I don’t want to bore you with all the details but this is a quick recap: 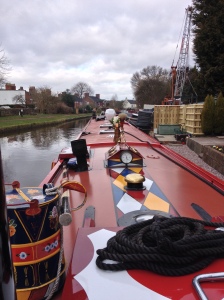 First and hopefully last time ever we have had to call the ambulance out to Roy, we were travelling back on the Macclesfield when he was taken ill. Scared me to death… lesson to be learnt…..never moor in the middle of nowhere as trying to explain to ambulance where you are is like mission impossible.

Helped our Daughter Jessica move house … more than just moving furniture as we were decorating, put new kitchen in, walls plastered etc. etc., I think you get the gist. It was almost a complete renovation. Lots of help from Angus our friend and long weekend, my daughter and her now fiancée are all moved in and settled.  That nearly takes us up to Christmas where we went out on the boat for 2 weeks. Best time of year as the canals are so quiet. 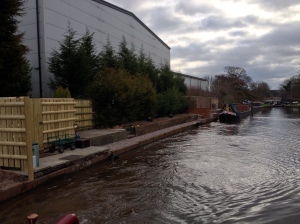 The New Year was also a new start as we said goodbye to Great Haywood marina which has been fabulous. We were offered an opportunity not to be missed and that was a private mooring in Stone with its own garden space on the canal and best of all Foxglove is now back in her birthplace.
We have really settled in Stone and it is lovely to be outside the boat builder who actually built Foxglove, Roger Fuller. It was really nice to bring her back home. Well we have made progress on the garden space that is all prepared for when we get back so I can start doing some planting of veg and flowers.
Another bonus is that we are now only 15 minutes’ drive away from our Daughter and she can also catch a bus down to see us so it has been a very positive move.

After two months of being there and now the nicer weather is on its way we have decided to take a few weeks out and travel to Llangollen. This was one item on our to do list that we wanted to do. I am very excited about “flying” over that Pontcysyllte Aqueduct…..that is what it looks like from the ground!
So there you have it…………..a quick update, believe me I could have made it longer. 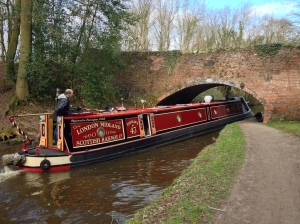 So here we are day 1 of our trip out. Sun shining but still a chill in the air, but who cares when you have the back cabin fire on when you are travelling.
We went in through the first lock of the day……….I think we have around 150 locks to do on this trip. GULP!!! We will have muscles like Popeye when we get back.
It was great travelling through Longport today as it always reminds me how this boat story began. Longport brokerage is where we bought our first boat from just over 6 years ago, so it always brings back home memories and I would never have thought 6 years ago that we would have sold up and be living on a narrowboat.

We contacted our daughter on the way to say we would be passing her workplace in a few minutes and there she was with her work colleague waving through the window.

We are moored up now and in the queue ready to go through Harcastle tunnel. We will need to put our alarm clocks on as we will be first one though tomorrow at 8am. Lets hope I am not in my pyjamas still!!
All in all it has been a fabulous day and it great to back out again travelling…….oh and blogging. 

6 Responses to Llangollen – Here we come!