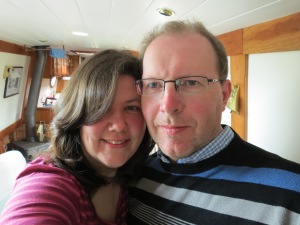 Today was a little cooler than yesterday which was good as we both woke up with extremely sunburnt noses and cheeks. They were burning so much last night I had to put Germolene on them to numb the pain. Not funny! I have quite a glow today to say the least. Who would think you could get sunburnt in the middle of April??

We travelled for about 30 minutes this morning before we decided to moor up at a little village called Brewood. It was deserted. It was very quaint, no big shops at all, sounded more and more appealing by the moment. There were quaint little houses and  pretty front terraced gardens all out in bloom. Visited the local butcher who was very friendly who embarrassed one of customers talking about her bunions!! Apparently he can be over friendly as the girl in the village bakery asked if he tried to snog me?? No, thank goodness. The girl in the bakery was also very friendly and she had a little song that she does if she asks if you want salad cream or mayo!! Something to do with the J -Lo song. Friendly little village although it was just so unbelievably quiet. We only saw 2 cars and 4 people walking about. Where had everyone gone? We arrived back at the boat with a homemade Steak pie from the butchers and 2 filled baps and 2 of the most yummiest cream cakes from the bakery. Enjoyed with a cup of tea and a sit down. Heavenly! Have you noticed how well my diet is going???

Saw some amazing countryside today and some wonderful parts of the canal. One part where we travelled just looked like an enchanted wood. It was lovely.

Also saw many narrowboats today moored up that have just been left there and neglected. It is very sad to see. One of them had so much greenery, moss and dirt on it that it will soon start to look like a tree. It is such a shame to see them lined up in a row as if they have just been forgotten about and I am sure they had as some of the licenses expired in 2009.

Arrived in Gnosall late afternoon today where we have stopped and done a few jobs. Roy has actually put up a couple of those plaques I bought yesterday. He must have taken the hint from reading the blog!!  He has also finished putting all the plates up that he has bought from e-bay. He has had some good bargains. I polished up the copper kettle and also the claxon. Kept rubbing so hard that I thought a genie might appear at any minute.

Anyway, whilst I was polishing away Roy heard a knocking noise…..quite a fast tapping. Wasn’t someone with a hammer kind of noise because it was going so fast it would have been impossible to do………stick with me here…….I am trying to describe the noise………like a pneumatic drill but quieter???………..Can’t think how else to describe it so I will just have to tell you……. it was a Woodepecker. Never seen one in my entire life before. Got my camera out, nearly fell over Roy and all his toolboxes he had got out just so I could get a photo. The bloody thing kept running up the tree every time I tried to zoom in on him. Anyway, eventually I got myself an amazing photo……. 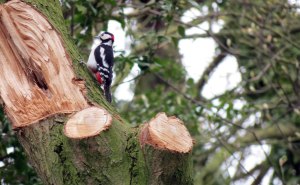 We will be passing by Norbury Junction tomorrow. That will be so weird as we have been there so many times by car and watched the boats go by that to actually see it from a boaters perspective will be fantastic.

I wonder what  surprises tomorrow will bring?

4 Responses to One Amazing Photo!