First of all I must say a big thank you to a couple who met on our way to Audlem as they have taken lots of photos of Foxglove when she was taken out of water and into the paint shed. Many thanks Alan & Vivien, the photos are excellent!

These are some of the photos that were taken: 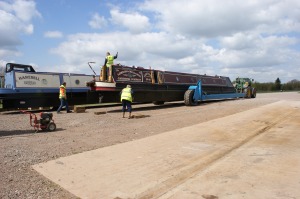 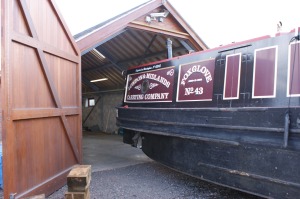 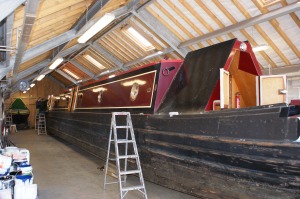 Sally Tooze (the painter) wrote to us during the week to tell us that Foxglove had been dismantled and stripped down ready for action!! She was not kidding. Her team has worked so hard it was unbelievable the progress that had been made.

She was back to bare metal with the help of “Two Male Strippers” Neil & Mike. They have done an amazing job. Most of the paint was off and sanded. All the rivets have had to be sanded by hand and there are lots of them. It really made us appreciate the hard work that goes into the preparation of the re-paint.

All the portholes had been taken out, Houdini hatches removed, there were parts of Foxglove all laid out everywhere. Sally had taken great care to seal all the openings to the boat so that nothing inside would get in a mess. Foxglove looked amazing. Very industrial looking.

We then had a look at a few paint colours. Apparently there are 50 shades of grey??? Isn’t that a name of a book? Sally could tell by the look on my face that the grey was not doing anything for me. Uninspiring was a good word. She opened up a few tins of red paint. I chose one instantly, then discussed with Roy ( who is colour blind) no help what so ever!! Then after discussing it with a couple of other people we ended up choosing this particular red that was my first choice. They always say go with your gut instinct. It is such a massive decision to make because if a colour is wrong it is going to be a disaster. I can tell you that 2 colour reds have been chosen, where I cannot say yet. I really hope they are the correct shades. So hard to tell. 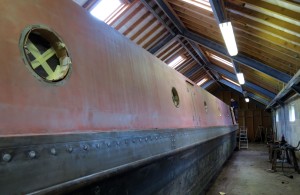 All the paintwork below the gunwales is going to be black bitumen with no gloss paint.
This is how Foxglove was originally done. There are rivets all the way round the boat on the part that is going to be black and we asked Sally if she can paint every rivet white. There must be at least a 300 rivets to paint which are about an inch in diameter each. Sally was very polite and said o.k we can do that. Much to her relief we were only kidding her!! We are not having every rivet painted white, they will be red………still joking!!!

The cratch cover has been sent away to be fixed as there was a big rip in it. Actually it had been cut by the previous owner for easier access!!!! Mad!!

We discussed a few other things that needed to be done and then left Sally in peace to carry on. It was very exciting to see Foxglove in the condition she was in and to also really appreciate the hard work that is going into her.

I came away though worried sick in case I have chosen the wrong colours. All the colours looked so different in different light, when stirred, inside, outside in the light……..it was very confusing. One of the things you have to consider is when the paint should eventually fade. Some reds fade to pink, dark reds can go brown or maroon…….it’s a costly mistake if we get the colour wrong. I will never know until I actually see it on Foxglove. Scary!

We will be visiting again next weekend. I wonder what she will look like then.

2 Responses to Week One