The boat is fine, no scratches bumps, knocks or anything, whereas I have come home with a massive bruise on my foot…. (A roasting dish fell on my foot), another bruise on my knee (walked into the dog gate as it was not properly pushed to the side), Lovely bruising across my back ( got myself trapped as I tried to squeeze pass the tiller and it decided to come back on me) oh and a bump on the head (knocked it on the boatman’s cabin door). Talk about accident prone. Dangerous thing this boating 😉

It has been a lovely weekend. We made out way to Wolseley Bridge yesterday. Roy started the boat up while I took Wish for a walk and I said I would meet him at the first lock.

It was icy this morning when we woke up but the towpaths were great for doggy walking. Wish played with a stick for most of the walk that I had to keep throwing for her. She loved it. I think I annoyed her as I kept stopping to take pictures and she was standing there waiting for me to throw her stick.

All I could hear behind me was the sound of ice breaking. What a fabulous sound.Thought it was Roy on his way but it wasn’t. It was a lovely couple called Roly & Sandra on their boat Rebus. 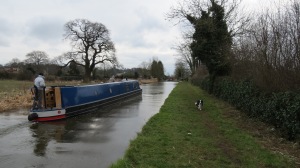 I hope I have got their names correct as it has been a day and half since we saw them and I have tried to remember their names. Roly commented on the engine as he said he used to work on them. They let me know that Roy was on his way behind them. Wish did her normal thing and helped at the lock. Whenever I push a gate open she decides to stand on her back legs and push the gate with me with her front paws. All happens so quick I can never get a picture because as soon as I would stop to take a photo Wish stands back down. Typical of a dog!

Anyway, sure as can be up came Roy in the distance on Foxglove. Rebus had made an  ice path in the canal as it had broken all the ice.I jumped on at the lock and took it through with Wish back on board and it was a good job because the towpath on the other side of the lock was just thick mud, not good with a dog.

Lots of people commented on the engine this weekend. We are quite surprised by the comments people have made and the interest they have taken. I managed to answer all the questions people asked. They were quite simple ones, I think if they had asked more technical questions I would have struggled. The engine really does make a fantastic sound as you are moving alone. Very therapeutic, in fact that is one of the comments a dog walker said.

Called in at Great Haywood farm shop to get some bread and mushrooms as I had planned to do a full English breakfast on Sunday. i had already got everything else.

It did start to snow a little on the way but it was a lovely walk then we got back on Foxglove and headed for Wolsley bridge. Not many boats about at all.

It was very peaceful.

Still dry weather today (Sunday). Another boat had moored next to us last night. It had just been recently painted and the colour scheme was stunning.L’Olinda was the name of the boat. This was the kind of colour scheme we had always wanted. It was really a beautiful boat. People are always so friendly on the canals. We had a nice chat with the owner of L’Olinda and then off we both went. They were heading one way and we were heading in the opposite direction back home.

Cold trip back today, but I have worked out as long as you keep the doors closed behind you are drop down a step ( I can only just see what I am doing though when I Have done this) you can feel the warmth so well from the back cabin stove as you  are cruising along. It is o.k while the canals are quiet because I would not do this normally as I could only just see. It must have just looked like a head driving the boat!

We stopped and had our full English breakfast around 11 today. Oh my goodness it was yummy! Mmmm just thinking about it now makes we want another one.

It has been a great weekend and it has been so nice to get out on the canals especially after being so poorly this past few weeks.

The boatmans cabin is coming together really well and I manged to take some photos this weekend.

Back home tonight because it is back to work tomorrow. The weekends go far too quick. Never mind, 2 months to go then I am off for a week……..seems like eternity when I say that……2 months. Can’t come quick enough.